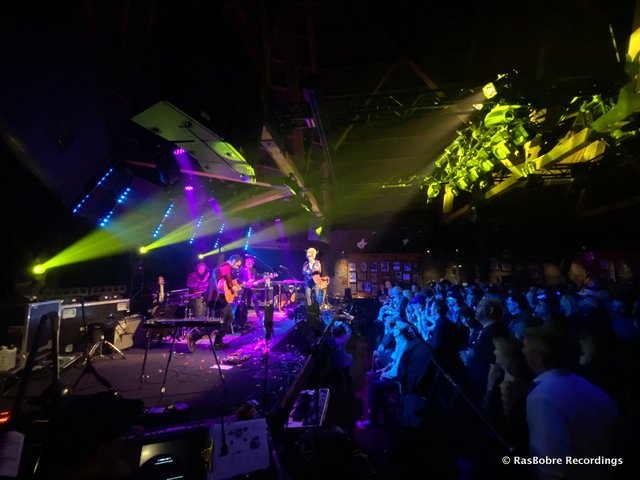 “Wherever this takes us, I know/That we’ve got each other, we’ve still got a long way to go.”

ALO is more than a band. It’s a musical relationship that has endured for over two decades, with band members playing in numerous projects together and apart. Following the 2012 release of their freewheeling Sounds Like This, the band took time off to work on various side projects. Zach Gill (keys/vocals) toured the world with the band’s college pal Jack Johnson; Dan “Lebo” Lebowitz (guitar/vocals) played shows with the Grateful Dead’s Phil Lesh; Steve Adams (bass/vocals) toured and recorded with Nicki Bluhm & the Gramblers; Dave Brogan (drums/vocals) joined up with Utah band, Mokie. These and other endeavors have all influenced the band’s new album Tangle Of Time.

More than previous releases, Tangle Of Time really taps into what makes ALO unique. It’s that special blend of classic songwriting and the ability to stretch out jams and distill dance floor grooves. It’s heartfelt lyrics that make you smile, reflect and just want to sing along either way. It’s four great musicians who all write and sing. And four friends who’ve been through a lot together and still support, challenge and inspire one another.

“I really appreciate the guys right now, more so than ever,” Gill shared, excitedly adding, “Years ago the feeling was, ‘I wanna get to my songs and see how they sound while we’re all here’, whereas now I’m rooting for everyone else’s songs. It’s great.”

Lebo described the shared respect and admiration the band felt during the recording process this way: “There are four strong opinions in the room, but playing together for so long we’ve all become pretty good at the empathy thing at this point; we can be very Zen about it. We truly value being together at this point in our careers, and whatever we get from our solo and side gigs, no matter how much fun we have, it’s not this.”

Put the record on your turntable, and you can clearly hear the band’s excitement to get back on the road and explore these songs with their audience. Improvisation is a staple of what the band does, and as Adams stated: “Being in that unknown is such a great life lesson beyond just the music. For all the careful planning and preparing we do, being in the moment is really when it all matters.”
ALO is;
Steve Adams - bass, vocals
Ezra Lipp - drums, vocals
Zach Gill - keys, uke, vocals
Dan Lebowitz - guitar, vocals
Please support musicians that are open to having their live shows recorded and shared by attending their performances and purchasing officially released recordings and other merchandise.
https://alomusic.com/
https://www.facebook.com/animalliberationorchestra/
https://www.jambase.com/band/alo

Uploaded by RasBobre Recordings on February 16, 2020